Learn to Scout with Google Earth and Google Maps

Scouting is one of hunting’s most important keys to success. You’ll shoot few animals if you can’t identify their likely feeding and bedding areas. But busting through miles of thick brush on hot, humid days in blind hopes of finding fresh deer droppings wastes time. You can avoid that with modern technology’s many options.

Although online scouting sounds easy, you’ll endure a learning curve. You must learn to identify features like forests, clear-cuts, creek beds and recent burns, as well as tree types like oaks, pines and aspens to pinpoint potential bedding and feeding areas. Identifying such hotspots helps you decide potential access routes or treestand locations. You can also read the maps and photos to locate lakes and pinch points, which often help decipher how and where deer travel. Identify swamps and wide rivers, too, so you know inaccessible areas before heading afield.

Here are eight things to look for, and identify, when scouting online. The sections in the photo above depict the different terrains and landscapes you want to look for on a map. Photo Credit: ATA

Farm fields have few textures, but their edges are straight or geometric. They’re one solid color, like tan, green or brown.

Hardwoods, which include oak, elm, maple, birch and hickory trees, look bumpy from overhead, and are usually light green in spring, dark green in summer, orange and brown in fall, and pale and gray in winter. When viewing fall, spring or summer pictures, zoom in and you’ll usually see individual tree canopies, which resemble circles.

Pine stands stay green year-round, but thick pine stands can resemble hardwoods from above if they’re old and mature. Pine tree canopies typically blur together, whereas hardwoods look more defined. Also, people often plant pines, and arrange them in rows, so their stands can look uniform from above.

River bottoms are typically covered with hardwoods. Sometimes you’ll see a creek or river winding through the middle. If the water isn’t visible, look for a winding indent in the land.

Ponds and lakes appear smooth. They tend to be an opaque green, or a blue or dingy brown, which contrast with fields colored a flat green, light brown or dark brown. Waterways usually have round or jagged edges, whereas fields usually have straight edges.

Swamps have little or no trees among visible patches of water. They’re usually found in lowlands, and connect to a water source.

Electronic scouting isn’t complicated. Read Bowhunting 360’s article “How to Find Great Places to Hunt” to find nearby public lands. Then use Google Earth for online scouting missions that identify places to scout on foot. Once you identify those areas, watch this short video to learn how to use a map and compass to ensure you don’t get lost if your GPS unit or smartphone dies. Cover all the ground necessary to confirm your electronic findings.

If you lack confidence scouting online or on foot, recruit a friend or find a mentor for help. The aerial maps will look different depending on the time of year. Photo Credit: ATA

Be patient: Deciphering oak treetops from pine treetops in grainy images can be difficult because they’re both green. Don’t worry. You’ll get the hang of it! Zoom in to enhance features before passing judgment. Confirm your findings through in-person observations. The more you use maps and aerial images, the more insights you’ll get from scouting online.

Look at different maps: If you’re struggling to learn those details, study the same area with different maps. Most maps have a specific purpose, which can help you gather more details about each area. Google Earth displays aerial photos taken by drones, airplanes or satellites. They’re good for identifying cover, funnels, habitats, bedding areas and potential stand sites. Topographical maps show 2-D elevation and terrain features. These maps use contour lines to show the shapes, grade and elevations of the area; including hills, ridges and valleys. Meanwhile, other maps and photos depict vegetation, helping you zero in on preferred habitats and food sources. Use several maps and aerial photos to fully learn the area.

Time and location depict diversity: The same area can look different in aerial photos, depending on the time of year the photo was taken. For example, oak trees might be green in the summer, rusty orange in fall, and gray in late fall and winter after losing their leaves. Aerial photos capture those changes. Determine which season you’re viewing before analyzing or identifying features. Additionally, each location has unique terrain and vegetation. Aerial maps of Michigan look much different than those of Texas, Colorado or Nebraska. Each has specific characteristics you’ll learn to identify while plotting your hunts.

If you like online scouting — and why wouldn’t you? —buy a hunting app or two that provides greater details and more advanced features than Google Earth. Most such apps show property boundaries and track your path. They also have an internal compass display, and let you mark hotspots with pins. You’ll find several options with an internet search, but expect to pay for them. If you decline to pay, check out the free Google Earth app. It does the job. 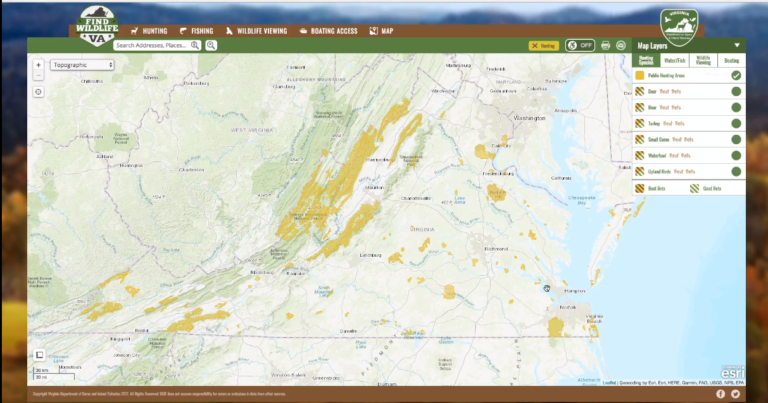