How to Hunt Big Swamp Bucks

Wetlands consistently hold mature bucks, while surrounding areas may kick out only yearlings. The reasoning is obvious: Swampy areas are too difficult for most hunters to infiltrate, essentially making them big-buck sanctuaries.

No matter where you live, you probably have access to wetland whitetail habitat, whether it’s cattail marshes, alder swamps, flooded timber, river bottoms or tamarack and black spruce forests. Often these lands are held in public trust because they’re simply too wet to farm or build on.

Even in heavily hunted areas, swamps produce big bucks because cagey, older deer bed where predators can’t reach them without detection, and bucks rarely leave these sanctuaries during daylight hours. If you’re willing to go the extra mile, you can kill mature bucks in swampy habitat. Perhaps the biggest key to hunting wetlands is finding the high ground. Islands within low-lying areas serve as bedding sites and may hold food as well. Plus, in some wetland areas, high islands may be the only places to hang a treestand.

A topo map or aerial photo can help you quickly locate these high spots. However, sometimes high ground isn’t so obvious. There might be just a small hump or ridge that’s a couple of feet higher than the surrounding area. Some of those humps might be hundreds of yards long, but others are just large enough for a deer to bed on. In the latter case, on-the-ground scouting is the only way to discover these areas, which are usually matted down from deer beds.

In open terrain such as cattail marshes, aerial photos can reveal much more than just high ground; you may even be able to see well-used deer trails, which quickly give you an idea of how deer move through the wetland. Whether you scout with aerial maps or with boots on the ground, try to figure out where deer feed and determine how they get from their swampy sanctuary to their food source.

The easiest way to hunt wetlands is to hunt along the edge and keep your feet dry. That strategy may work fine for does and young bucks. Unfortunately, mature bucks typically only leave these areas after dark, returning before the sun rises the following morning. To really hunt these animals effectively, you’ll have to enter the labyrinth.

You may be able to infiltrate the lair with a canoe or skiff if a river or creek runs through the wetland. Using a boat gets you deep into a buck’s territory and leaves other hunters behind. Many areas, however, won’t permit boat access, so you’ll have to slog your way into the swamp with hip boots or perhaps even chest waders. This isn’t easy. Slogging through a boot-sucking swamp will have you sweating, generating plenty of human odor and noise.

And carrying a stand on your back adds to the exertion. If the land is privately owned, laying down sheets of plywood or creating bridges over particularly wet spots can make travel easier, but in many areas, you’ll have to fight your way along in boots, and whether you hunt in the morning or evening, at least one trip will most likely be in the dark. In some extreme cases, hunters may elect to sleep in the woods to minimize the amount of travel into and out of the wetland. A tree saddle, tripod stands, or ground blinds might be your best option in swampy terrain. Photo Credit: Bowhunters United

Once you’ve penetrated the swamp, you’ll still need a place from which to hunt. In a hardwood flood plain forest or on an oak island within a cattail marsh, there may be plenty of suitable stand trees. But if you’re hunting in the alders, cattails or a sedge meadow, suitable stand trees may not exist. At best, you may be able to hunt from a small tree with a tree saddle. However, tripod stands or ground blinds may be your only stand options. Of course, in thick cattails, you can always conceal yourself behind heavy vegetation, creating shooting lanes as needed.

Swamps serve as good deer sanctuaries because they are difficult to traverse, and even if predators do enter them, it’s hard for them to remain undetected. But in northern areas, when swamps freeze, they become much more accessible for predators — human and otherwise. That may be your best chance to truly get in tight on a big buck without disturbing him. Just be careful. Cattail marshes often have thin ice, even while other areas have walkable ice, because the decomposition process in the marsh generates heat. Be careful anytime you walk on ice and carry a set of ice picks around your neck to help you pull yourself out of the water if you should break through. 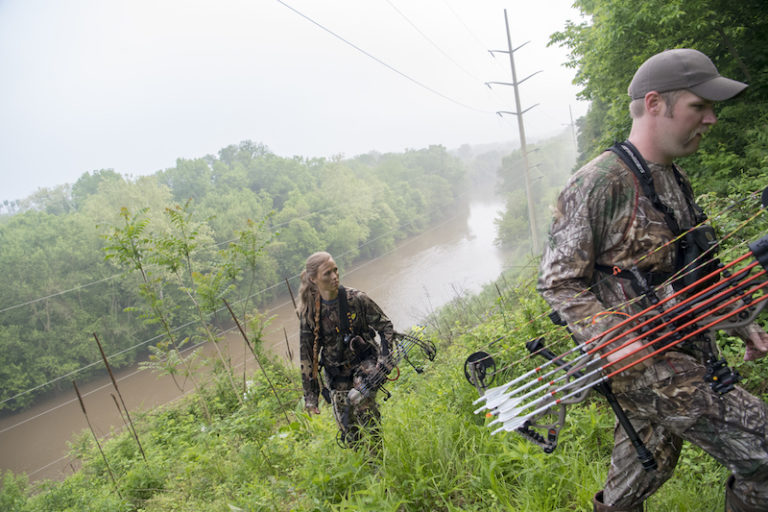 How to Hunt Water Sources Tools for Navigating the Backcountry