Use the tips to improve your decoy game, elicit reactions from live animals, lure them within range and increase your success rate. Photo Credit: Flambeau Outdoors

6 Tips for Using a Deer Decoy

Bowhunting hinges on a deer being within a hunter’s effective shooting range. Consider using a deer decoy if you’re struggling to get close enough to take an ethical shot. Decoys can help lure deer to within range and increase the odds of an ideal shot.

Dante Gramuglia, marketing specialist for Flambeau Outdoors, has used decoys in his hunting strategy for the past five years. He said decoys allow hunters to manipulate and cause a reaction 100% of the time. Reactions can be positive, like when a deer charges or circles the decoy, or negative, like when a deer ignores it altogether or does a hit-and-run too quickly for the hunter to shoot.

“Whether the reaction is going to be in the hunter’s favor or not will always have 50/50 odds,” Gramuglia said. “If you were playing the lottery, those are extremely favorable odds. That’s what makes hunting with a deer decoy so exciting. (Reactions) may cause a chain of events that affect the hunter’s harvest success rate.”

Gramuglia believes using decoys has increased in popularity recently because decoys are easy to use and have realistic features. If you want to give them a try or improve your current strategy, Gramuglia shared these six tips.

“There isn’t a bad time of year to use a deer decoy,” Gramuglia said. “The best time is throughout all stages of the rut, especially peak rut. This is the time of year when hunters will best experience different forms of interaction between the deer and the decoys.”

Try using a single doe or buck decoy during the rut, depending on the story you’re trying to tell, since bucks run solo and does are often pushed away from others during the chasing phase. Outside of the rut, Gramuglia recommends using two decoys. In the early season, bucks are in bachelor groups and fawns stick with mothers. Deer group together again in late season, as well. How you place the deer in the scene is important. Photo Credit: Flambeau Outdoors

Gramuglia places doe decoys broadside to the tree he’s sitting in because he anticipates bucks will approach from behind the doe. He recommends placing the decoy 10 yards closer than your maximum shooting distance so the deer is withing range if it approaches closer or farther away from the decoy. For example, if you’re maximum shooting distance is 30 yards, put your decoy at 20.

Don’t forget about wind direction, either. Place decoys upwind because deer will mostly approach from the rear or circle downwind of the decoy. He places buck decoys upwind as well, but angles them slightly quartering away because he believes most bucks attack from the side, where other deer are most vulnerable. You have the perfect opportunity to draw your bow when your target deer is fixated on the decoy.

Gramuglia said putting a doe or buck decoy in the open in the heart of a buck’s territory will get the buck’s attention. “Intruders draw the ire of a rutting buck on his home turf,” he said. “There’s a good chance, driven by biology, that when a rutting buck sees or smells (a doe decoy with an attractant scent), he’s going to be compelled to investigate.” Because a decoy can only provoke a reaction after a deer sees it, it must be visible from most angles. Pairing the decoy with scents can create an even more realistic sensory experience. Gramuglia said deer will often see the decoy before the hunter sees the deer, so hunters must stay alert.

Deer decoys look like deer, obviously, so you don’t want to carry them through the woods in a way that might cause another hunter to mistake them for the real deal. Instead, disassemble the decoy, if possible, and put it in a bag out of sight or wrap it in blaze orange. Or do both. Some decoys, like the Flambeau Outdoors Scrapper Buck, break apart and come with a blaze orange carry bag. Be especially cautious carrying the decoy during gun seasons. 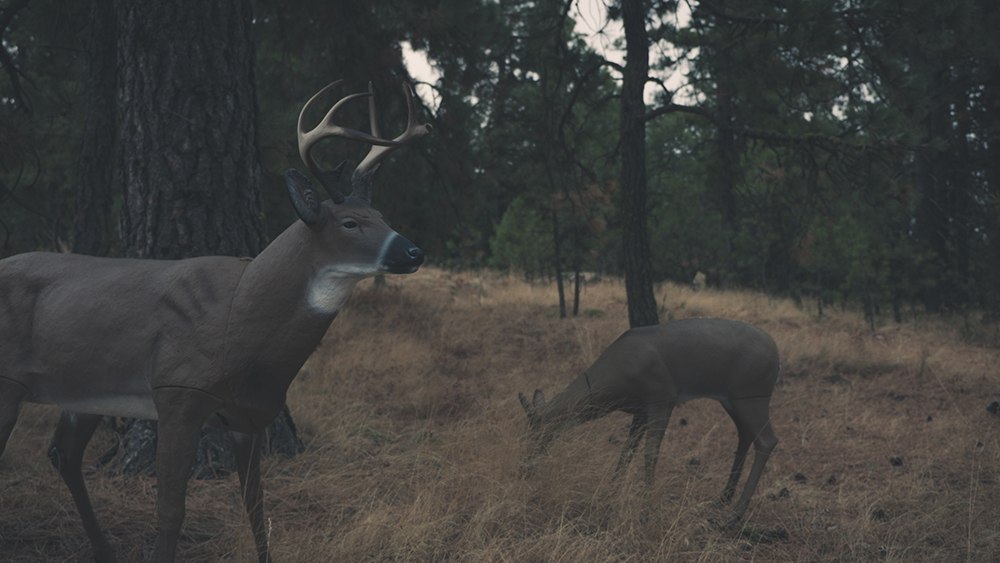 Make sure to take your decoys with you when you’ve finished your hunting trip. Photo Credit: Flambeau Outdoors

5. Use Decoys on Private and Public Lands

Most manufacturers design decoys to be lightweight and compact. Some decoys are collapsible, and the legs and head nest within the body cavity for easy transportation. Gramuglia said decoys give public-land bowhunters an advantage because public lands have more hunting pressure than private lands, which causes deer to become wary. “A deer decoy’s presence can be used to mitigate the wariness of other deer and give them a false sense of security,” he said. Whether you’re hunting private or public lands, Gramuglia recommends hunters carry the decoy safely in and out because deer can become accustomed to decoys if left afield.

Consider where you’re hunting geographically and determine what decoy best portrays deer in that region. For example, Gramuglia said decoys come in different dimensions, and deer across the country also vary in size. The Midwest has bigger-bodied deer, so he recommends a large buck decoy. Contrarily, a small buck decoy might be best in Southern states because it better replicates deer in that area. However, both decoys can be used nationwide to create different reactions using this concept: “If you are looking to intimidate and challenge other bucks, Boss Buck is the better option,” he said. “On the other hand, if you are looking to agitate other bucks, the inferior size of Scrapper Buck is best.”

A decoy is a helpful tool in any bowhunter’s toolbox. Use the tips above to improve your decoy game and lure deer in close for a high-odds shot.