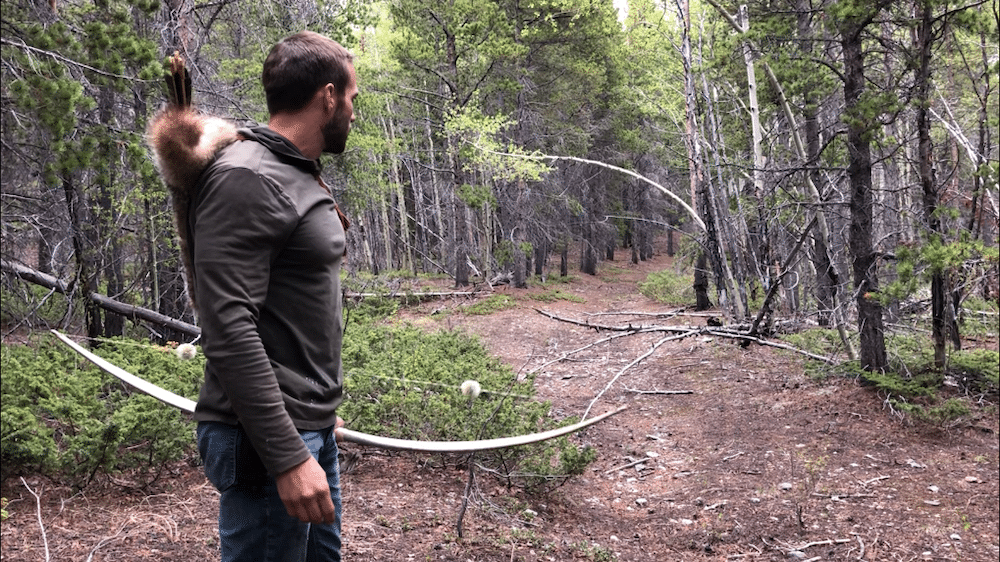 U.S. Fish and Wildlife data shows that only 30% of hunters pursue small game, compared with the 80% that pursue large game. That’s unfortunate, considering all the benefits and opportunities small game hunting provides.

That’s unfortunate considering all the benefits and opportunities small-game hunting provides. Bowhunting small game is even less popular than using a firearm, but it’s more challenging, rewarding and available than using a gun. If you haven’t tried it, you should. Correy Hawk, 33, of Plattsmouth, Nebraska, is an avid hunter of big game and small game with a longbow. Correy’s father gave him his first bow when he was 3 years old, and he’s been shooting seriously ever since. He dove into bowhunting more seriously nine years ago and is currently the owner of Organic Archery. Correy’s archery and woodsmanship skills, as well as his love for hunting, adventure and the outdoors, earned him a spot on the History Channel series “Alone.”

Correy was one of 10 contestants in Season 7 who tried to survive alone off the land for 100 days in the Canadian wilderness. During his time on the show, he arrowed and ate several small-game animals. Although his situation on “Alone” was extreme, the insights from someone who hunted small game when his life actually depended on it are fascinating.

Plus, small-game hunting yields tasty meat. Correy said it’s hard to beat a rotisserie-roasted grouse, but he also enjoys eating cottontail rabbits. His favorite small game to bowhunt is the dusky grouse because they’re beautiful and quirky, they inhabit “breathtaking environments,” and they require a “fair amount of stealth to get close to.” However, he also regularly bowhunts rabbits and squirrels, which are more accessible nationwide. 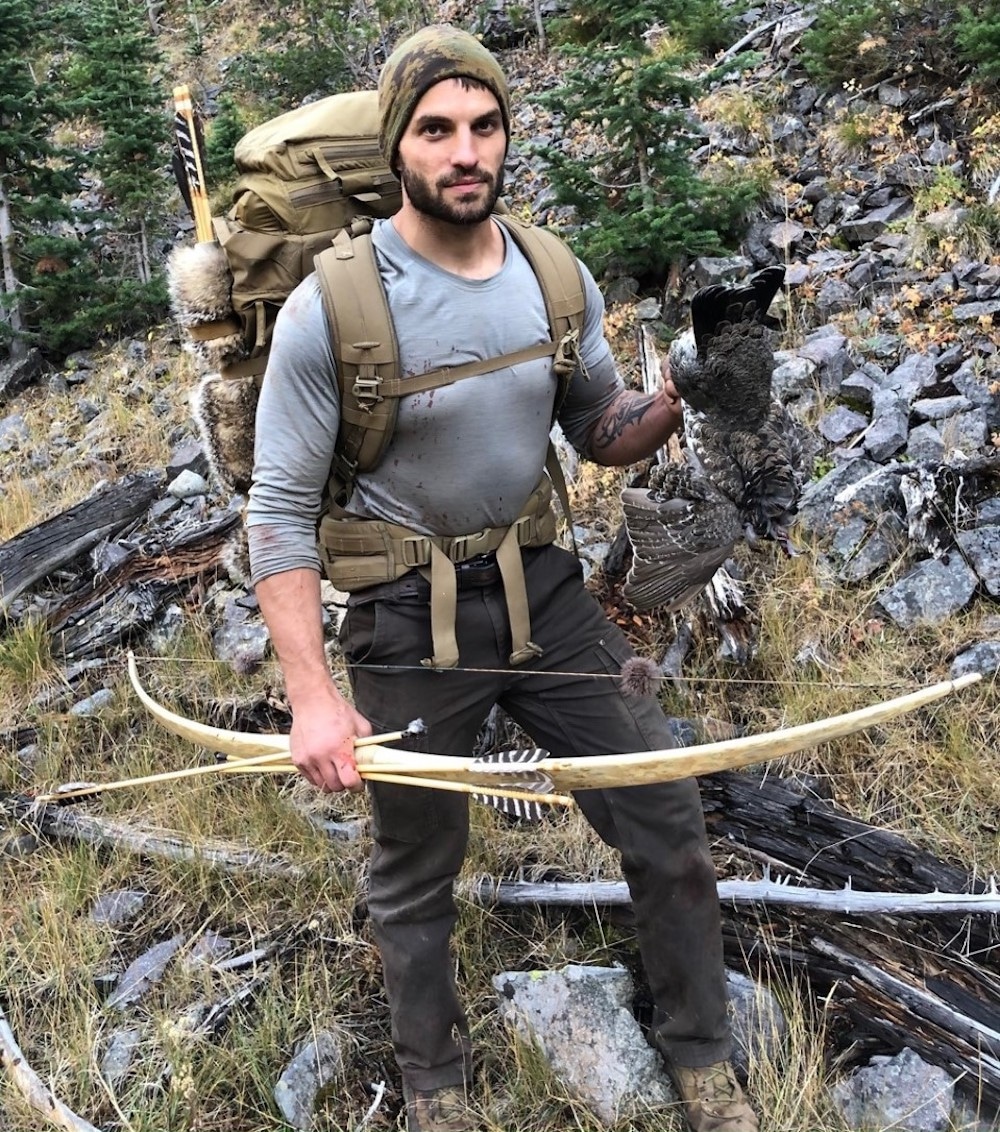 Recurves and longbows are ideal for small-game hunting, but you can even hunt small game with compound bows if you’d like. Photo Credit: Correy Hawk

Regardless of what he’s chasing, Correy hunts exclusively with a wooden self-longbow, a bison-hide back quiver and wooden arrows fletched with turkey feathers. If you don’t have time to build your own gear like Correy did, don’t worry; there are plenty of affordable equipment options in archery pro shops nationwide. You can use your current bow or buy one specifically for small-game hunting. Instinctive shooting works great for fleeting opportunities at small game so recurves and longbows are ideal, but compound bows will work too.

Correy recommends first-timers start with an entry-level fiberglass bow, some basic carbon arrows, and an assortment of target and hunting points, including blunts, judo and broadheads. Visit an archery shop near you to find all the gear you need. Correy said camouflage isn’t necessary for pursuing small game. He usually hunts in an earth-toned shirt or flannel and whatever pants he put on that morning. What’s more important is your hunting strategy. 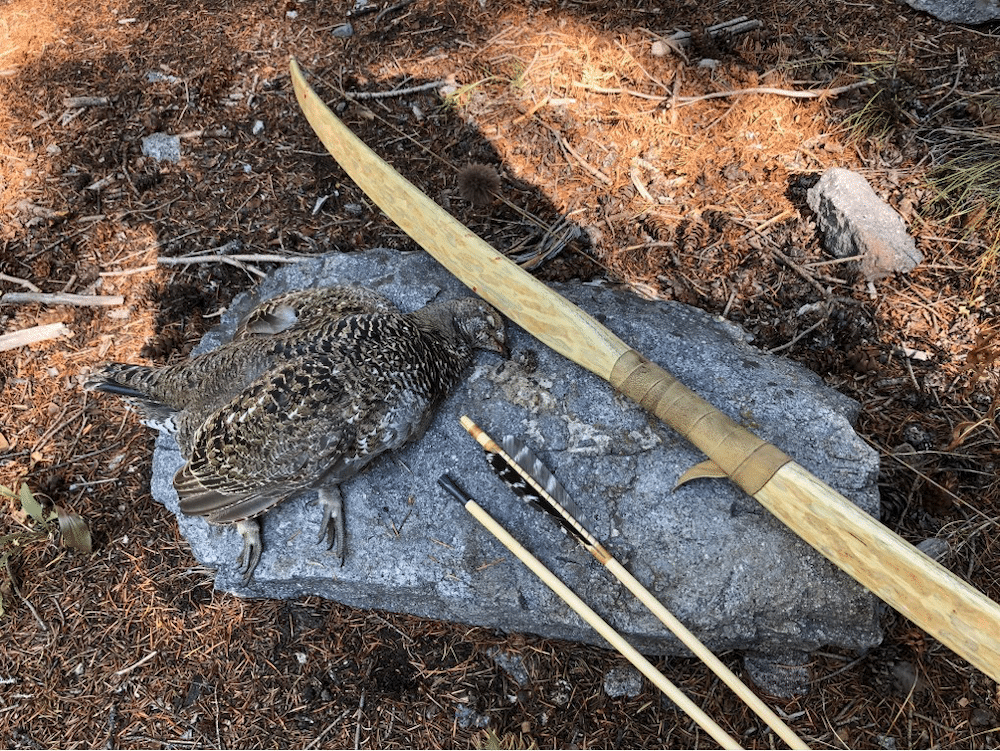 Correy advises being close to small-game animals when you take your shot. Photo Credit: Correy Hawk.

Correy likes to be within 15 yards of small-game animals before taking a shot. “They’re too little to take longer shots on, and nothing feels worse than wounding an animal,” he said. So, how do you get that close? Stealth and patience.

“Small game won’t tolerate an elephant in the woods any more than big-game animals,” he said. You must take your time, creep slowly and be methodical. When you finally get close enough, you’ll probably have to wait even longer until a clear shot presents itself.

“Once you’ve quietly made it into position, a rabbit might freeze in an inconvenient spot for quite some time; or a squirrel high in the canopy, or a grouse tucked behind sagebrush,” he said. “Just hang in there, and they’ll give you a shot. Rush, and you might go home empty-handed!”

The best small-game animal to pursue first is a squirrel because they’re everywhere, regardless of region, and their mannerisms make them easier to approach. Squirrels are notorious for traveling back and forth between the ground and treetops. That gives hunters the opportunity to sneak within range, but they’re quick and unpredictable, making them harder to arrow. Correy admits to losing and breaking many arrows when he first started hunting squirrels. Even when he’d make a perfect shot in the tree, he’d get the squirrel but lose his arrow because it would often pass through the animal and soar off into the distance. Now, he waits until they’re on the ground to shoot them. He also learned to use broadheads instead of field points.

“Squirrels are so darn tough,” he said. “It’s not uncommon to make a great shot with a small-game point and watch the squirrel run off with your arrow! A broadhead decreases the chances of wounding or losing squirrels exponentially.”

There’s always a learning curve to bowhunting animals, regardless of their size. It pays to know your quarry’s behavioral patterns. Correy also advises bowhunters to practice regularly. “It’s the surest way to give an honorable, clean death to the game we pursue and cherish,” he said. “We owe it to them to make good shots.” He suggests shooting a small 6-inch dessert paper plate and practicing until you feel confident and have regular, high-percentage hits at 12 to 15 yards.

His last tip is to have fun and use the extra time in the woods to study your environment and animal behavior. “It doesn’t always have to be about bringing home animals,” he said. “When you’re bowhunting for small game, there will be days when you don’t! If we open our hearts and our senses, and appreciate the time away from the frantic and bustling rhythms of modernity, our soul is enriched with every trip into the wilderness.”

For more tips, read the Bowhunters United article “The Beginner’s Guide to Small-Game Bowhunting.” Then, after you’ve mastered the art of arrowing squirrels, try your hand at rabbit hunting!