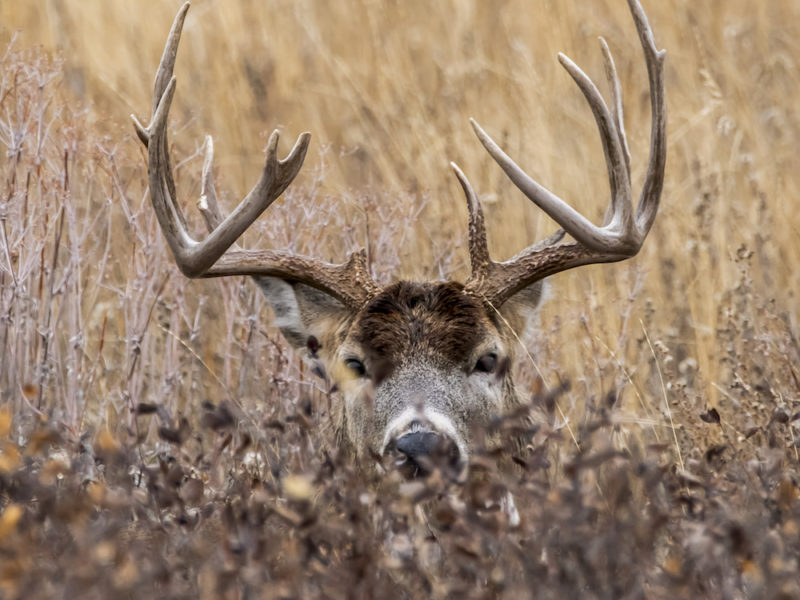 How to Find and Hunt Deer Bedding Areas

Whitetails spend a significant amount of time each day bedded. Learning how to identify bedding areas and how to hunt near them without spooking deer can greatly improve your bowhunting success.

Hunting tight to bedding cover can be productive for different reasons throughout the hunting season. Prior to the rut, mature bucks may not move from their beds until the final minutes of shooting light each evening, so sitting close to them may be your only chance of seeing a buck during shooting light. Later, as the rut kicks in, you can intercept bucks cruising bedding areas for estrous does. And when snow and cold grip the landscape late in the season, you can find whitetails holed up in thick bedding cover, seeking shelter from the elements.

Deer bed where they feel secure from predators. There are two categories of bedding cover. The first is thick cover. Inside these seemingly impenetrable tangles, deer can hunker down and hide, and they can usually hear predators coming. This type of cover could be a thick copse of streamside brush, a stand of swampy alders, a coniferous swamp or a high pine ridge, just to name a few. These thick areas also protect deer from cold winds and deep snow in winter.

Other times, deer choose to bed in somewhat open areas where they have a commanding view of their surroundings. Classic examples of this type of bedding site are a finger ridge, a bench partway up a hill, or even just a high mound within a swamp. Typically, a deer beds facing downwind, allowing it to keep tabs on predators upwind with its nose while watching for those it can’t smell. A deer bedded like that is very difficult to approach.

In addition to facing downwind, deer like to bed with their backs against something. Look for beds against deadfalls, hillsides or even old farm machinery in a pasture. In deciduous forests, they go out of their way to bed under the oddball conifer that stands out from the other trees. The same is true for a single tree in open grass. During cold weather, these beds will almost always be on the south side of the object, where deer can soak up radiant sunlight.

Most bowhunters have probably stumbled upon plenty of beds while scouting. They appear as deer-sized ovals of matted grass or depressions in snow. Find a large one surrounded by one or two smaller ones and you’ve found a doe bed with her fawns. Does often bed together in small groups for most of the year. Bucks may bed with other bucks during summer and again after the rut, but they’re loners during most of the archery season. Those wily, mature bucks are notorious for choosing bedding sites that are very hard to reach without being detected.

Deer purposely choose resting areas that help them avoid predators, human and otherwise. So hunting near a bed isn’t easy. But it’s a great way to get a crack at a mature buck.

It takes diligent scouting to figure out exactly where a given buck likes to bed. Early in the season, before the rut kicks in, wise old bucks are pretty nocturnal. You may catch one on his feet, however, if you can sneak in to within 100 yards of his bed before he rises to feed just minutes before dark. A stealthy entry to your stand is paramount. You may have to rake a trail ahead of time or wear some type of hunting moccasins to sneak in. You’ll also need to be on your scent-control A-game. And you’ll only be able to hunt close to the bedded buck when conditions are in your favor — when there’s no wind or a crosswind that keeps the buck from smelling you. Utilize every twig of cover on your approach. Getting close to any bedded deer is tricky; closing the gap on a mature buck is borderline impossible.

Another option is to set up downwind of a known doe bedding area during the rut as bucks seek does to breed. Set up downwind of the bedding cover to avoid bumping does. Naturally, cruising bucks will also approach from downwind. You’ll need to position yourself so approaching deer don’t smell you. Terrain features, such as saddles, a boulder or downed trees can funnel deer toward the bedding area without pushing them directly downwind of you. Think carefully about your stand site and your approach to it. Be meticulous with your scent-control regimen and consider an all-day sit.

Learning where and how deer choose their beds is an important step to understanding how whitetails relate to the landscape. Figuring out these bedding sites can help you set up a perfect ambush.

Share this...
← Playing the Wind with The Hunting Public Bowhunting Funnels and Pinch Points →