Diehard bowhunters have no offseason. Year-round archery practice is fun and keeps your shooting form in top shape. And whether you’re seeking redemption for the bruiser buck that got away last fall, or you’re getting a jump on next year’s buck, winter is a great time to scout.

Perhaps the biggest advantage is that you won’t freak out about snooping around a buck’s core area. Many bowhunters create sanctuaries on their properties by staying out of these spots during hunting season unless trailing a wounded deer. Deer feel secure in the refuge, and thus, stay on the property.

But you’ll do little or no harm entering a sanctuary after bow season. If you bump deer to a neighboring property, they won’t be killed by other hunters. And you can feel free to leave your scent. Deer you disturb have months to return to their routines after you tramp through their bedding areas. Entering your designated deer sanctuary during the off season is a good way to track deer to other areas of your property. Photo Credit: Joe Shead

Scouting a sanctuary lets you study where deer bed and which trails leave their bedding areas. That helps you identify stand sites just outside the sanctuary. You also have a decent chance of finding sheds from next year’s buck somewhere in the sanctuary.

Winter scouting isn’t all about sanctuaries, however. For starters, some areas don’t have refuges, especially if it’s public ground. The principles are the same, however. You can poke around in the woods to learn where deer bed and how they move. Plus, last fall’s sign remains visible, including rubs, and possibly scrapes if there’s no snow. Either way, you’ll find tracks, beds and droppings.

In some cases, deer spend winter in different places than they spend autumn, particularly in cold, snowy regions. But in much of the country, deer stay in the same general area year-round.

Either way, watch for rut sign, such as rubs and scrapes, which are generally made in fall. Deer usually return to rutting areas they used before. After all, bedding and feeding areas generally remain the same each year, and terrain features like saddles, ridges, funnels and sunny hillsides seldom change.

While scouting each winter, pick apart the landscape. Don’t worry about ducking out to avoid disturbing deer. Drop waypoints on your GPS or smartphone app to identify bedding areas, food sources, and likely exit trails so you gain a sense of how deer move.

If you’re still concerned about leaving scent, scout on rainy or snowy days. If you live in snow country, time your foray for late winter or early spring as the snow recedes to pinpoint scrapes. You’ll also be able to see deer trails, which remain icy a few days after the snow melts because they’ve been packed all winter. Sheds are a great find during the off season. It shows you the growth of the herd in your area. Photo Credit: Joe Shead

Another benefit of winter scouting is finding shed antlers. Sheds reveal which bucks survived hunting season, including those you didn’t know about before. Sheds can also help you pinpoint where specific bucks hang out.

The benefits don’t end there. Winter scouting gets you out of the house, and bridges the gap between deer season and spring food-plot work and/or more scouting. If you’re suffering from cabin fever, go walk through the woods.

You won’t find a better time to learn how deer move around in your hunting area, and which bucks could be there come fall. Information gleaned from scouting can help you plan and fine-tune bowhunting strategies for this fall and many more to come. Winter Scouting with The Hunting Public 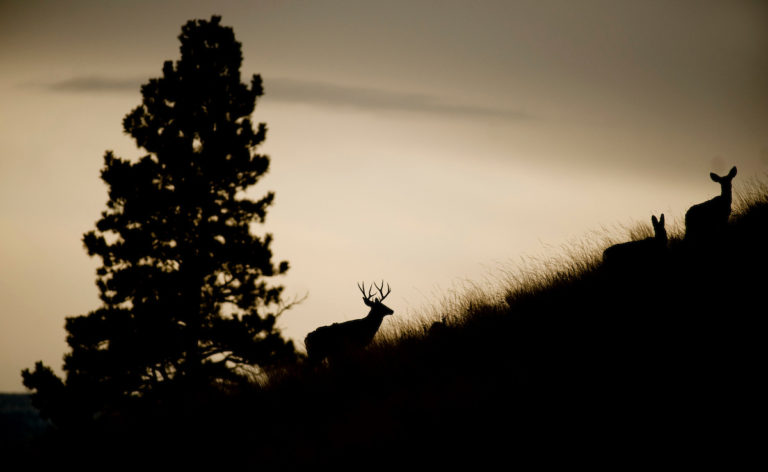