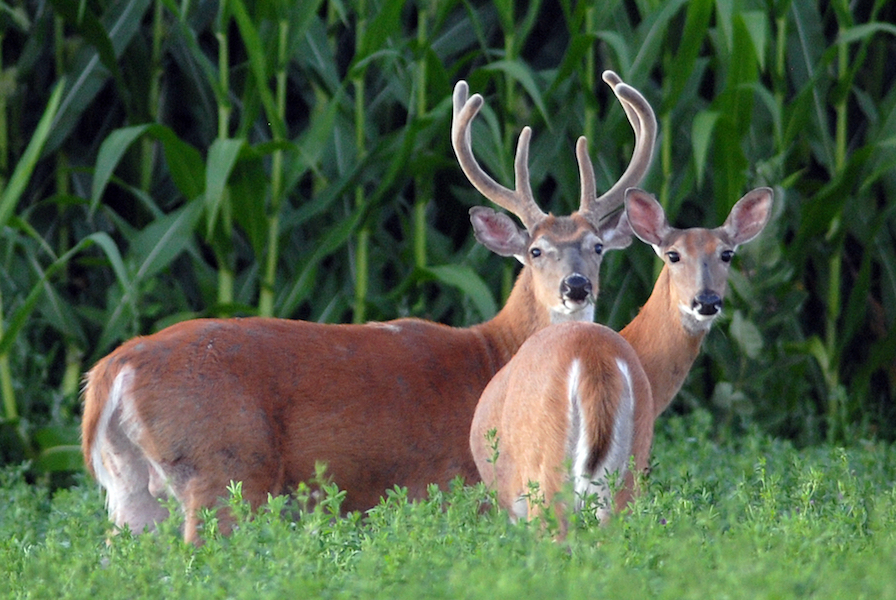 Whitetail Deer Throughout the Year: What You Need to Know

Deer are fascinating animals that change their activity drastically throughout the year. They act, look and feed differently depending on the season.

That’s why the deer you observed in one location in August might be hunkering down somewhere else when hunting season opens.

The more you learn about deer and their behavior, the better your hunt. You can use your knowledge of deer behavior to anticipate movement and behavioral changes. You need every edge you can get when pursuing deer.

Here’s what to expect from deer at different stages of the year. Does drop fawns in the spring. During this time, they seek nutrients from grass, buds, fruit and tender shoots to produce milk for their young. Photo Credit: Shane Indrebo

Spring brings plenty of food for deer after a long winter. During this abundant time, they will feed on grass, buds, tender shoots and fruit. This food is important for does; spring is when they have their fawns. They’ll need to eat plenty of food to produce milk through the spring and summer.

Fawns weigh about 10 pounds and can walk right after birth. Does will often leave their fawns in a secure hiding spot like tall grass while they feed. If you come across a lone fawn, its mother is probably nearby and will return shortly.

Bucks also benefit from the added nutrition as they begin growing their antlers, which start as small nubs. In summer, bucks form bachelor groups, groups that travel together during the spring and summer and generally follow the same movement schedule of bedding and feeding. Photo Credit: Shane Indrebo

Bucks form bachelor groups during the summer; it’s not uncommon to see several bucks of different age classes together. The does will be with their fawns and possibly another doe or young buck. You’ll find groups of deer feeding in lush meadows, orchards or anywhere there is new growth. Younger plants taste better and are more tender.

A buck’s antlers start as nubs in April and reach their full potential by August. During summer, antlers look fuzzy from being covered in a “velvet skin” that carries nutrient-rich blood for growing antlers. At that stage, antlers are soft to the touch and easily damaged.

You’ll also notice that deer have a thin coat of fur, which is a lighter color then their fall coat. While growing, antlers are soft and protected by a fuzzy coating called “velvet.” Velvet is rich with blood vessels to nourish the growing bone, and eventually falls away to reveal hard antlers. Bucks usually shed their velvet in early fall. Photo Credit: John Hafner

Most regions start their archery season in September or October. During this early-fall period, deer start to shift to their fall patterns.

Antlers harden in late summer and shed their velvet once they quit growing. The velvet dries and falls away when its blood supply ends. Bucks often hasten the process by rubbing their antlers against trees or brush, possibly because the dying velvet is itchy.

Once the velvet disappears, bucks change drastically. Their testosterone levels rise in preparation for the fall breeding season, called the rut. Bucks that once hung in bachelor groups are no longer friends and become solitary.

The deer’s food sources also change to mainly high-fat foods like acorns. Keep an eye on deer movement and be ready to move your treestand location to accommodate the change in food sources. Bowhunting during the whitetail breeding season, or “rut,” is a common tactic among deer hunters. During this time, bucks are motivated to breed, which may result in increased movement and deer sightings for anxious bowhunters. Photo Credit: Shane Indrebo

Around the end of October through November, bucks go crazy. It’s the annual breeding season, and they are driven to pass along their genes to any available doe. They throw caution to the wind, which is good news for bowhunters, who have the chance to harvest an otherwise cagey buck that is love-stricken and vulnerable. In the winter, deer form large herds and focus heavily on feeding. They often bed much closer to food sources than earlier in the year, making hunting over or very close to their feeding areas the best tactic. Photo Credit: Shane Indrebo

In the winter, deer form large herds and focus heavily on feeding. There may be periodic breeding from does that come into estrous late; these are usually young does born the previous spring. In late winter, buck testosterone levels fall, and they shed their antlers. This creates another fun hunting activity called shed hunting – searching the woods for deer antlers.

The more you learn about deer, the better your chance at a full freezer. To learn more about deer and hunting strategy, visit our Facebook page for updates on our weekly articles.